A very amusing post over at The Ice Floe reminded me of this memory. When you've read them both, you'll understand the connection.

It was a lesbian commitment ceremony in 1998, planned by my daughter elswhere and her partner RW. From far and wide about 100 people were streaming to a beautiful Victorian resort-town near Canada to witness the event. Months of preparation had gone into the event, with not a little trepidation about encountering overt and incipient homophobia.

The ceremony was a rousing success, as was the entire weekend, including the meeting of the two brides' families for the first time, and some family feuds were healed. Throughout all the planning - the invitations, the caterer, the dresses, the rehearsal dinner, the musicians, the program, the vows, the hotel, the photographer, etc., etc. - nobody involved batted an eye that this was for two women (admittedly, it was still the era of "It's the economy, stupid," but still, I was impressed.)

Later elswhere reported this happening after the event:

She and RW stayed on in Victorian Resort Town for a couple of nights to recover from the festivities, and so it wasn't until two days later that they went together to the local rental shop where they had rented various items like chairs and tableware, to settle their account:

RW: "We're here to pay our bill for the Booland wedding."

Saleswoman: "Oh, you're from that wedding over at the Victorian Resort Town Hotel. We heard it was really unusual."

Uh-oh, they thought, here it comes.

They held their breath to prepare themselves for the reply. 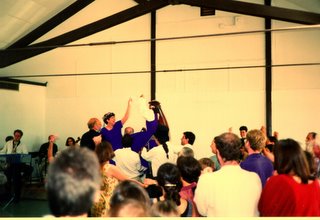 Yep, keep your eye on the important stuff! I find that a thoroughly Canadian response.

What a sweet story! Made me laugh.

I saw a one-woman play once about a woman who just wanted one thing: A traditional Jewish lesbian wedding. It was so cute and funny!

How is that I had no idea you were the wonderful elswhere's mother? I had the honor of meeting both her and MG in December, and truly wish they lived closer to us. Your granddaughter and my daughter got to go hunting for trolls together.

The wedding photo gave me the happy sniffles. Thanks for the treat.

Hoss - How I wish I could deliver those hugs RIGHT NOW!

Udge - It was close enough to Canada that she could have been.

TLP - One of the many ironies in this story is that it was not even a traditional Jewish lesbian wedding, because one of the brides wasn't Jewish, and there was no rabbi!

Squid - I was sure EVERYONE KNEW. I try not to pull the mother-of-elswhere card too much, but she and prowesslessnesslessness are definitely my crowning glories.

"Happy sniffles" is what your comment gave me! Must be something going around the blogosphere.

Sorry, I must have been on autopilot then. I read "near" as "in" (well, they do look and sound alike) and combined this with the post on Uncle Skaterboy (he is Canadian, right?) to make 2+2=7.

Not only do you have creative math and creative eyes and ears, but a very sharp memory! Uncle Skaterboy is indeed Canadian, and in fact he was the only one to bring an ironing board to the wedding. Which was put to good use!

Awwwww! That was just so cute! I love wedding stories.

Drink lots of water and have a fabulous time!!

And a Happy Birthday to a man lucky to have you as a sister!

Thanks for commenting positively and enthusiastically on our blog: israelvideoblog.org

Please keep stopping in... and maybe even create a video to post about your like in Israel.

These articles are fantastic; the information you show us is interesting for everybody and is really good written. It’s just great!! Do you want to know something more? Read it...:Great investment opportunity in Costa Rica: costa rica real estate jaco, jaco beach condo, jaco beach condos. Visit us for more info at: http://www.jaco-bay.com/

Erectile Dysfunction is regarded as the most prevalent male sexual disorder and Viagra, the Pfizer manufactured medication is considered to be the most effective treatment of erectile dysfunction by physicians as well as patients worldwide. People suffering from erectile dysfunction instantly opt for Viagra and Viagra related information online as well as in various offline sources in order to start off their anti-impotency treatment successfully. If you are an erectile dysfunction patient, you can seek out Viagra details on several authentic online sources and more especially, the sitemap section at buy-Viagra-with-us.com contains informative Viagra links that would provide you significant Viagra details and ensure your successful treatment with the drug.